After a warm night (more than 1 blanket and with clothes on) we started packing our gear together, and we were of towards the coast. Because of the 360 kilometre drive we decided to do the trip in 2 days, after lunch eagle eye Renzo notices that the right back tire is loosing air. The air tube of the tire was broken.
The nickname eagle eye he got from Trudy, she named him so because of the fact he is searching for precious stones which lay on the ground. And this is because Gwynne has a bucket full of stones which he had found next the road of his house, which should have great value.
After a small hour the spare tyre has been placed and we head off again, after 200 kilometre driving we arrive at a place called Mkumbara a big sign next to the road says, camping site.
To get there we have to cross a small bridge, the bridge is made out of big stone plates which lay next to one other. Renzo is driving the land rover helped by instructions of Dirk over the plates, the land rover almost falls in the big ditch because of the fact the tiles at the side are just connected on 1 side of the road. Putting the land rover into low gearing and with the diff lock the land rover backs up. With the next attempt we manage to cross without any problems. Driving along the road we meet a Dutch guy Hubert who together with his girlfriend runs a wood factory. Getting at the tembo lodge, Christina welcomes us and tells that we can camp were ever we like, next to that she asks us what we would like for dinner, 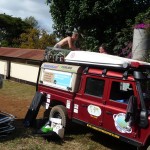 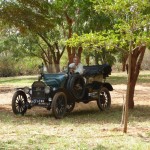 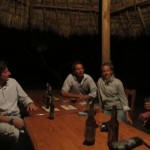 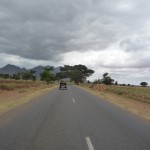 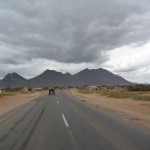 This entry was posted in Africa, news, reisverslag, Tanzania. Bookmark the permalink.