Waking up in a rainforest is always a delight; since the vast majority of the animal kingdom calls for attention, or more; screams for attention. And they will get that. Silence in deserts can be overwhelming, but the symphony of the rainforest gives you an experience of the exuberance of life itself that is unprecedented.

We leave early and have opted for the Bloomfield track against all laws and advice. A route through the rainforest that is only accessible for four-wheel drive cars. In addition, we caught the message that one of the rivers is much too high because of the abundant rains, so that all off-road vehicles can not get through. “We’ll see” says Dirk, and I agree with him. The adventure beckons !!

In the beginning the T-Ford climbs effortlessly through the green tunnel. The path is reasonable, but soon we come across a board with a 22% increase. It is just swallowing but perfectly the Model T goes against it. The Landrover seems to have more trouble with it, but it goes well in the low range. The triumph is celebrated with a cup of coffee made by Trudy. After this we descend and climb again with short curves, keeping it going.

Then we come across a board with 27%, we look at each other, but without many words we continue, we see. But here too the T-Ford buffs roaring, with slipping tires against it. Caramba !! The cogwheels crack, but get upstairs just as calm to cool down. This gives us the opportunity to see the beauty of the green of forest giants, tree ferns, lianas, strangler figs and many birds. On the way our path is crossed by a Cassuari, a one and a half meter high flightless bird from the Dinosaurs era. Magnificent!!

It gives us the feeling that we are sitting in a huge garb since we now come across a board with a 32% increase. Again our eyes cross each other with some care. There is only one possibility: SPEED IS EVERYTHING!! And oh miracle !! The T-Ford gets this slipping and scraping, pounding and grunting. Dirk had the feeling to be in the gearbox, the gears were audible, but we’re upstairs.

After a further descent, a notorious river waits for us, winding its way through the rainforest. First the Landrover, who hit the other side, sloshing and roaring. Then the T-Ford, and oh miracle! He seems to be doing well, he saves it and after much ascent and descent we reach Cape Tribulation. Here the jungle reaches to the sea. Before we get to the beach, we scan it on saltwater crocodiles, but everything seems safe. Not much later we find a camp site and go to sleep with a glorious sunset. 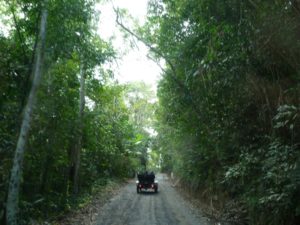 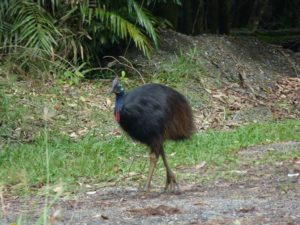 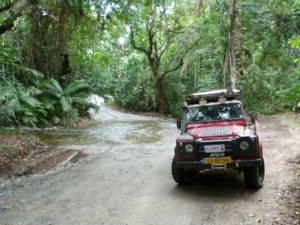 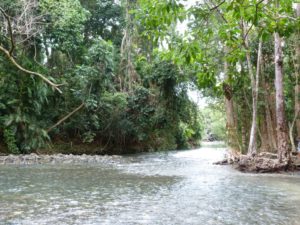 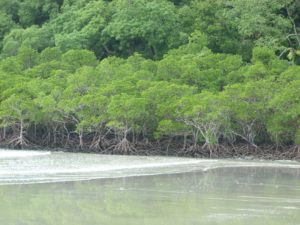 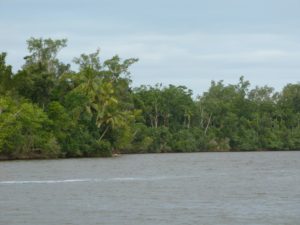 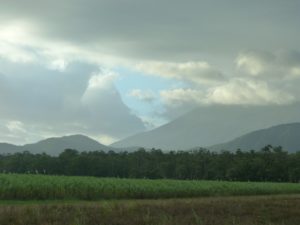 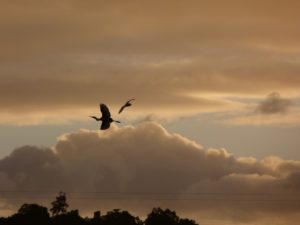 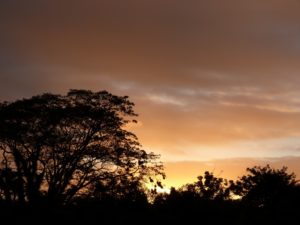 One Response to Bloomfield track