At the campsite there is also “Das rollende hotel”.

It is a big bus, with a trailer behind it, with 34 sleeping places in it!

Each window is a bed. They are making a round tour of 43 days with 28 people, most of them are German. 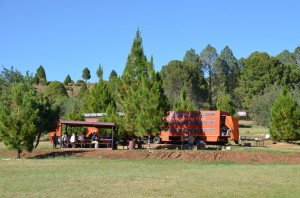 Matthias joins this tour and gives a donation for SOS.

Dirk searches the spare lightbulbs for the Ford, he checks the LandRover magazine, but without any result. Finally he finds them at the back of the Ford..

At 10 we leave, beautiful roads again. 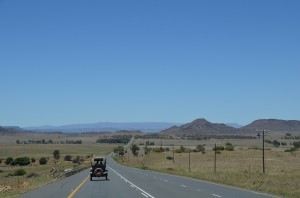 According to Dirk, the front crankshaft bearing makes more noise today. Dirk-jan joins him in the Ford to listen to the engine. 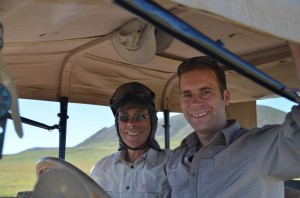 Dirk-jan thinks it is not worse than the days before, so we drive along. 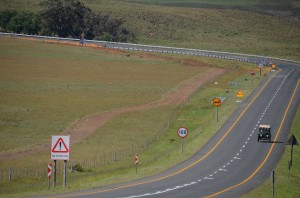 Inge joins Dirk-jan in the model T to have some wind in the hairs.

Some parts are very steep, up to 2000m sometimes.

Every morning a lot of stuff has to be put in the car, in the morning the backseat of the LandRover is quite organised, but during the day it’s getting worse.. 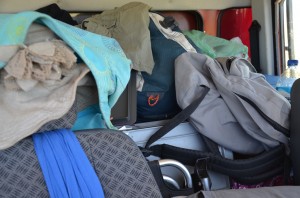 We sleep at Jennifers Backpackersplace, we can use the kitchen and one sleeping room for free. No big tent building today.

Tomorrow we go further to the IndianOcean.

This entry was posted in Africa, news, reisverslag, South Africa. Bookmark the permalink.