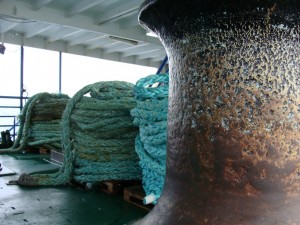 This morning we left with Don Baldon, an old ferry who sailed in Greece from 1995 to 2008.
4 o’clock in the morning we were already there and quarter past five we finally were on the boat. 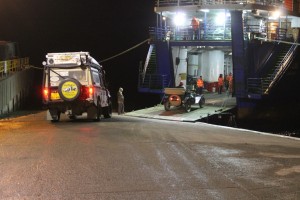 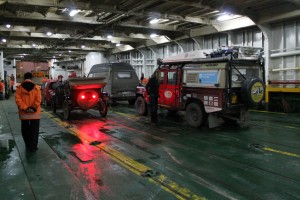 Usually you have reverse gear on the boat, but we could turn inside the ship because it was not busy with cars. After 5 hours we were in Chaiten. 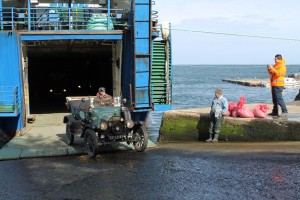 off the ferry in Chaiten

Chaiten was buried in 2008 under a lava flow. Here, we first have breakfast, got money and food, and filled our tanks because we don’t know what lies ahead of us. The first track was beautiful through the mountains and a beautiful paved road. We would go to Porto Cardenas, but everything was closed. The road has now become gravel and 30 km per hour the max. The next town perhaps? Meanwhile it was raining and later on snow. Poor Dirk, Arnaud and Watson! In the jeep we played the Cats and it was warm. Then it appears that all the villages consist of one house on the map and are close, it was getting later and then snow! Suddenly a snowplow ?? 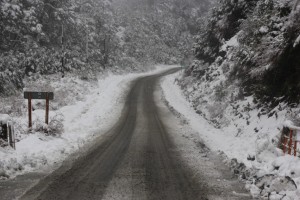 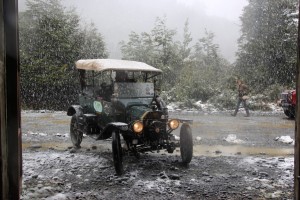 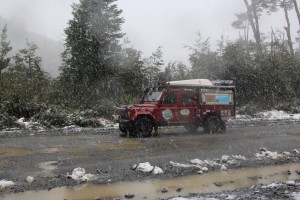 landrover in the snow

The village La Junta was 70 km ahead. Then suddenly Villa Santa Lucia shows up, but all cabanas were occupied. We keep trying, then we come to a lady who rented rooms to workers. Almost with our foot in the door we were allowed inside and sleep, we had sheep and potatoes for dinner, and in morning warm rolls with plum jam. 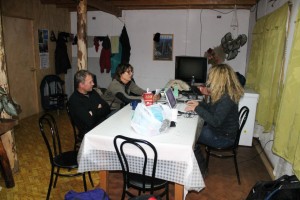 our stay in Santa Lucia

We had to sleep in the attic, mucho frio! We had warm farewell and got on the road to La Junta, with an average speed of 30 km per hour