Report of 29 of June
By Benno and Thecla

Departure from Guayaquil. We find our way through the whole city by asking the way.
Even enthusiastic locals drive before us and show us our way out of the city. 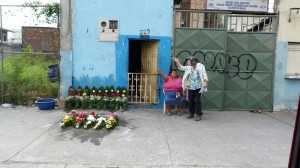 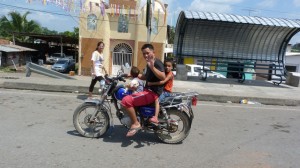 four on a motorbike

When we on the outskirts of the city we get surprised by the green nature, but it’s a shame that there is also so many plastic rubbish, which is hanging in the trees.
Suddenly stops the Model T on the side of the road. Dirk has heard an worrying sound and is afraid that …So first a ride with Benno who can hear also the sound.
Benno thinks the sound isn’t coming from the just ready bearing cap, but thinks it comes by a combination of low octane of the petrol, high surrounding temperature with gives a much higher temperature of the motor. The well known haggle.
Benno can Dirk only a little bit reassure.
We drive quiet on along a lot of different plantations with a lot of different sorts of fruit.
The T gets a lot of attention all the way, especially from the police who lets us stop so they can make pictures.

driving under the trees 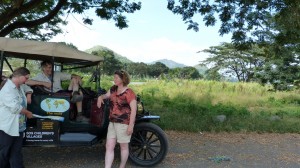 relaxing after diagnosing of a strange sound from Model T 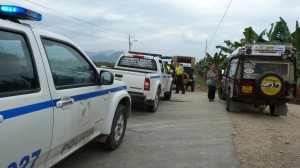 Fifty kilometers of the border, in Santa Rosa, we find a side road, with a beautiful place to camp in the wild. Nearby a farm with a lot of cows who they held for the production of milk 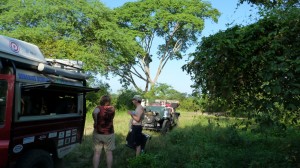 camping in the wild