Posted on 4 November 2014 by Rozemarijn

Report 4th of November
By Robert

Today we drive from Luján (Argentina) to Salto (Uruguay) via the border crossing at Paysandú.

In the morning we say goodbye to Marcelo, Diego and the other people in the SOS Children’s Village in Luján.

Diego helps us getting out of town. It has been raining heavily over the last days, and the centre of Luján has been flooded. We are lucky though, as the weather is clear and sunny today.

On the way we pass the Rio Paraná on two enormous bridges.

The delta of the river is beautiful, a wetland full of birds. The T-Ford scares a stork on the side of the road. It flies of in panic and hits a powerline. Feathers fly around in the air, but the stork manages to make a safe landing.

We stop for lunch at one of the many Parrillas.

We cross the river Uruguay at Colón. On the Uruguayan border the officials spend more time taking pictures of the cars than to deal with our papers. I think we are on quite a few facebook sites tonight. 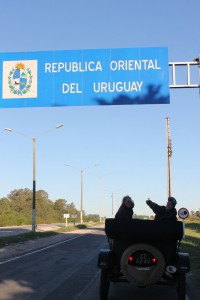 We don’t know anything about Uruguay, but we like the country immediately. At dawn we drive through an area with beautiful palmtrees, and we are surprised to see a lit, tarmac running track between two villages. This seems a well organised country! 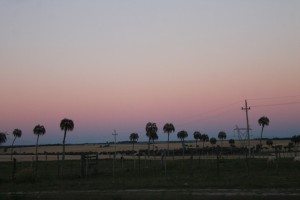 The SOS Children’s Village in Salto is hard to find. We have no adres, we only know that it is outside the city and that everybody knows it. It’s dark as we reach Salto, and after asking for directions four times, we reach the village. We are welcomed by Franco and have a good nights sleep in the guest house.

This entry was posted in news, reisverslag, South Americ. Bookmark the permalink.