Yesterday evening we discussed how we could plan our trip so we could leave town without much delay, using the good friend google maps and streetview.
The trip goes to the border of Tanzania to a place called Namanga.

At 08:30 in the morning we had breakfast, and after a short new team instruction how to place the bags on the Range Rover we left at 10:30 to Tanzania.
A short lunch prepared by Trudy we were good to go, we needed to do some groceries in a local town.
At that time we found out we had a problem we did forget the most important thing Beer!
2 towns further down the road we stopped to get our beer, that was a small mistake because of the fact that there was a very unfriendly person who approached the T-ford and started talking out loud and probably swearing in Swahili next that his lunch was coming out of his mouth while talking he was encouraged by the local people.
Quickly picked up Trudy and Renzo at the store and left town.

5 kilometres before the border we found a nice campsite, after a nice beer we make our camp.

Tomorrow we go to the border of Tanzania 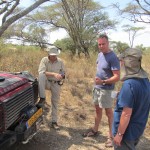 Driving on good and empty road 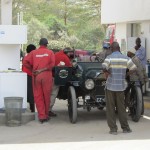 Again lots of people at the Model T

Driving out of the city

This entry was posted in Africa, Kenya, news, reisverslag. Bookmark the permalink.