Edit by Dielof and Fred.

After a refreshing shower, we could have one at the house, we are all busy. Dirk wants to clean the filters of the model- t so the engine gets more air. Dielof and Fred are making up reports in the morning. They are not that good in handling the computer, so that takes extra time. Our hosts, Diane and Lyle, went to their store.

In the afternoon we have a photo shoot and coffee at the store. The name of the store is Bumper to Bumper. We thank them for their hospitality.

Dirk get 10 litre motor oil for the Model T from Lyle. 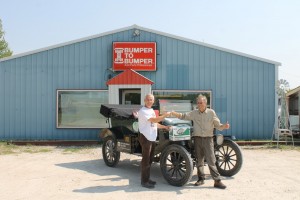 After that we depart for a very nice route, which Lyle pointed us out on the map, through the grain fields, direction Winnipeg.

At 7.00 pm we are at the nice camping side. At Birds Hill near Winnipeg.