We start the day with looking for a garage to solve the problem with the Land Rover.
They check the car with the computer but they can not find any problem. So they think that the problem is solved.

We want to find a campsite in the hills, so the Land Rover has to climb a lot.
Again the engine failed, so the problem is back again.
The campsite is not what we want, so we decide to stay one more night in the hotel.
Today we have an appointment with Bill Sherril, the man from Houston where we started our tour in the US.
Bill has arranged, with the support of Jay Klehfoth, de Ceo/Editor of the Model T Ford Club of America, that we can visit the The Tonight Show of Jay Leno.
First we have a conducted tour through the garage of Jay Leno. He has a very rare collection of all kind of classic cars and motorcycles.
After this tour we go to the studio for the show.
It is a beautiful show with entertainment and music.
After the show they made a picture with us and Jay Leno. 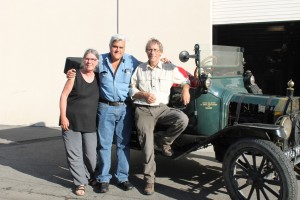 Back in his garage Jay showed us his most favourite cars.
And of course we take a picture with Jay in the Model T. 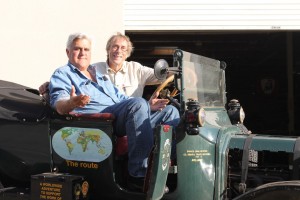 Jonathan, a motor mechanic and a friend of Bill, tries to solve the problem of the Land-Rover and gives some advices to Dirk. 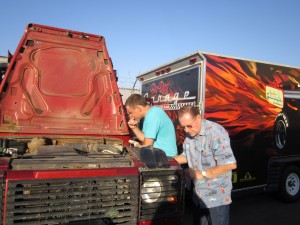