Today is a special day.
The Space City Model T Club in Houston has because of our coming back and fare well, organised a BBQ.
Our hostess and host are Pat and Bill Sherrill, members of this Model T Club.

our hostes Pat and host Bill

We have a special relation with this Model T Club, because the start of our trip in May of this year was also organised by this club.
In May we had a ice-cream party.

ice cream party in May

A lot of members came to the BBQ and Dirk gave a presentation about our tour through the USA and Canada.

After that the delicious BBQ started.

During the old-timer event last October in Hershey, Dirk and Trudy has met Dennis Gorder, the president of the American Model T Club.
Dirk has told to Dennis that he tried to collect a licence plate of every State they traveled through. And he still was missing some plates.
Dennis arranged that there was in Houston a box with plates that Dirk was missing.

Dennis also send a winter cap of the Model T Snowmobile Club.
Very useful for Dirk when he is ice skating in Holland.

Dirk and Trudy also had some presents for there hostess and host.
Pat got a shirt with the logo of the Model T Worldtour.
Fortunately she likes the color blue very much.

A size of a shirt for Bill was not in Trudy’s store, so Dirk gave him a typical Dutch red handkerchief. Trudy promised Bill it was a clean one.

After the very nice BBQ there was ice and cake. Not a regular cake, but one special made for this event. 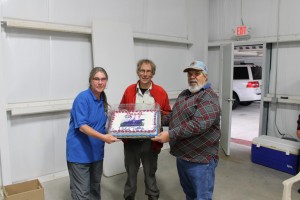 At the end of the party we say good-bye with Bill and Pat in front of the Model T. 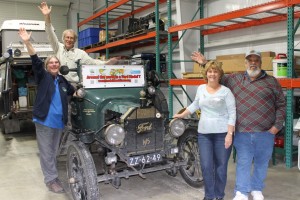 The reception in May and this fare well party in November in Houston affected us very much.
It is so special to be so far from home and to be welcomed so nice and friendly by people with the same passion; the Model T.

Members of the Space City Model T Club, thank you for this.